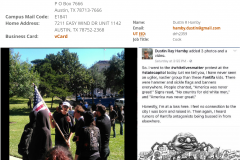 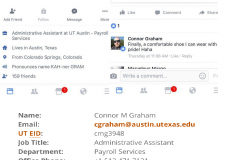 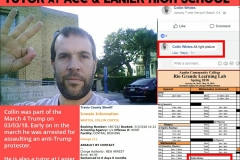 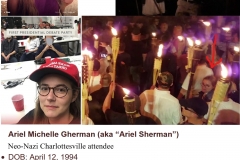 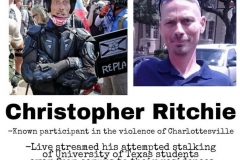 Edit: 9/4
1. Dustin is still on facebook just under a different name–let him know how you feel about his beliefs: https://www.facebook.com/hamby.dustin
2. Dustin’s boyfriend, Connor Graham, is also an employee at UT as an administrative assistant. He shares many of Dustin’s atrocious views. His information has been added to this post. His profile can be found at: https://www.facebook.com/cgrahamx
3. We’ve been contacted and informed that former co-workers of Dustin’s previously informed UT that Dustin and Connor were potential threats to UT students. Clearly, the administration has heard these concerns and doesn’t give a shit–and they won’t until they are faced with mass public opposition!

Dustin Ray Hamby is an employee of UT. He’s a vocal white supremacist who participated in the Neo-Nazi “White Lives Matter” rally back in November of 2016. After more local fascists were exposed, Dustin upped his security and removed more of his information–deleting/hiding social media accounts and address. The address listed below is his last known address as of 2016, and may be inaccurate. However, he still works at UT–and was recently promoted to cook!

White supremacists have no place on our campus, and especially not as employees who are supposed to serve the thousands of students–many of them non-white–that attend this University. Fascists should neither be permitted around students nor should they be employed by a supposedly “public” University. Our tuition’s should not pay the salaries that fund the activities and lifestyles of fascists.

While you’re at it, you could contact Dustin and let him know what you think of him and his activities. Just be sure to take the necessary precautions so him and his fascist buddies can’t find out who you are!